On the evening of September 2, the Illinois House dealt a stunning blow to Speaker Madigan and handed a victory to Governor Rauner and his efforts to bring reasonable work rules to state government.

The labor contract, between the state of Illinois and the AFSCME (American Federation of State, City and Municipal Employees) which represents about 38,000 state employees, expired on June 30th.

The governor and the union hammered out an extension to keep the terms of the expired contract through September 30th. The union felt Rauner’s position on salary and other items was a failure to bargain in their best interests. They considered his firm stance to be an attempt to provoke the union to strike so he could then take action.

In support of the union’s position, the Democrats in the both the House and Senate passed Senate Bill 1229 which prohibited a strike by the union and prohibited Rauner from a lockout of employees if an impasse in the negotiations occurred.

The objective was to bring in an arbitrator and take negotiations out of the hands of the Governor. This would let decisions worth billions of dollars be given to an unelected third-party whose allegiance would be questionable.

The Governor promptly vetoed the bill in July, and called it a ‘direct, frontal assault” on taxpayers.

The Senate responded on August 19th by voting 38-15 to override Rauner’s veto. The House had until September 4th to also pass an override of the governor’s veto through a three-fifths majority (71 votes) by its members.

On September 2nd, the House (namely Speaker Madigan) failed to muster the necessary votes to follow the Senate in overriding the Governor’s veto.

The failure to override the Governor’s veto signals a change. Representatives are starting to listen to taxpayers and not Speaker Madigan.

Governor Rauner will continue to negotiate labor contracts between the state of Illinois and the AFSCME. Negotiating with state employee unions is one of the most important responsibilities of the Governor and a major way of controlling the state’s pocketbook.

Find out how your state representative and senator voted on the motion to override the governor’s veto in the charts below. 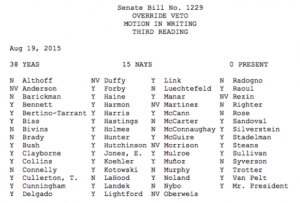 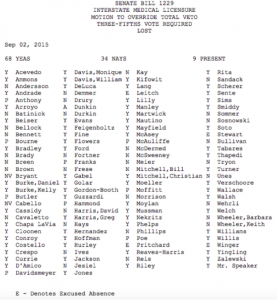